vX was an old project which aimed to do lots of nifty things in the least code possible (3KB without gzip!), but among its goals, developer friendliness wasn’t present. So now, I made a new library, this one is 5KB before gzip, and supports most of what vX does, but with DOM manipulation as well, in a jquery-like manner, and animations with queuing and easing. The new library (which doesn’t yet have a name) aims to be really lightweight (which really doesn’t matter much), while being more developer friendly.

For example, I can select all elements with the class “test” using .cls(“test”), and make them purple by doing .cls(“test”).css(“color”,”purple”) similar to jQuery. I can do .id(“yay”).load(“lib.js”) to load something using ajax. Creating elements is pretty easy too, say I want to load a random script, I can do .create(“script”).attr(“src”,”url”).appendTo(.tag(“body”)) and I can add events to something using .tag(“button”).index(0).on(“click”,function(e){alert(“yay”)}).

Here’s a nice little demo of what it can do http://jsbin.com/owuge/31

I intended to post this back in March 7th, but I was working on a rewrite of the library, which would be a tiny bit larger but implement CSS-selectors and be easier to maintain.

The Ajax Animator (Wave/Mini interface version) now has support for basic Onion skinning, where the last keyframe is semitransparently placed in the background to aid in the positioning of the next keyframe. It’s now enabled by default at 20% opacity but can be disabled. 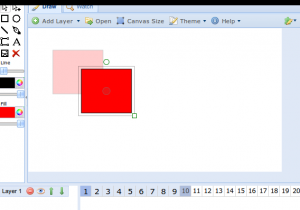 To disable it, click the advanced button on the right side of the toolbar and find the entry labeled Onion Skinning, there you can set the onion skinning opacity or disable it with 0% opacity.