My Google+ profile was suspended on grounds that were not wholly unexpected, but still shocking. I’m likely violating many of their conditions, as I’m 16 (under 18 at time of writing) though when my Google Account was registered, I probably lied and said that I was 30 (At that time, when I was 11, I tended to do that with all services to evade the nonsense COICA on Neopets). I’m not really the victim here (Though I’d like to pretend that I’m pretending that I am so I have an ostensible excuse for narcissism without admitting it by admitting it). I hardly ever share anything on Google+, so I lose nothing except for the ability to make an occasional uninsightful post and the ability to brag about my 3.4k+ followers.

I assume it’s the fault of every social network to obsess over its user base, to define a subset of humanity and designate those as members. To praise individualism, differences and variance yet rely so heavily on the homogenuity and uniformity of the users. A network can not be inclusive and exclusive at the same time, to assume that’s possible is the definition of insanity.

It’s a pity how a minor issue can inflate so much. A minor annoyance in the legalese which every average legally inept and time starved human that we all assumed Google would turn a blind eye to in order to focus on user adoption. “Use the name which people know you by”. It’s a startlingly obvious notion for social networks, if a software system is attempting to duplicate the nuanced structure of physical and digital relationships in a unified and coherent implementation, it makes sense to retain the basic handles which we rely upon.

But rather than draw upon this logic, that sentence is followed upon by the possibly inconsistent idea to “Use your real name”. What if your “real name” isn’t what you’re known as? What if you don’t feel comfortable revealing this information? This attempt at recognizing nuance fails so blatantly at the most basic principle of consistency and blatantly disregards the considerations of a rather significant portion of web users.

Some say that this principle is good, that it filters out those who should not belong in the network anyway. That those who tend to use pseudonyms do not belong on a good faith network which depends on the cooperation and trust of every individuals. That pseudonyms are employed by criminals and those with malignant intent, and therefore all precautions must be taken to eliminate that risk.

A network has a different role in dealing with its users than a specific group does. There’s a rather interesting notion that is presented by Google’s terming of the rules as “Community Standards”: the idea that everyone who uses Google+ is a part of some sort of community. Not a loosely associated network of individuals through transparent circles, but a community as if every one had to occasionally encounter and take offense to each other.

Postel’s law, the idea that a software framework should be liberal in what it accepts and conservative in what it sends, should apply with the massive-social-network hopeful known as Google+. At the “web scale” which Google operates at, it should be clear that humans often have very few attributes in common. The slightest interpersonal misalignments turn into gaping canyons on the magnitude of billions.

Pseudonyms mean quite literally a fake name. Now, why would someone want a fake name? The simplest answer which by no means encompasses all or even most uses, is that someone has something to hide. As the evil voldemort-controlled ministry of magic in harry potter and the deathly hollows part 1 the movie leader said “You have nothing to be afraid of if you have nothing to hide”, which I found shockingly similar to Eric Schmidt’s “If you have something you dont want shared online, maybe you shouldn’t be doing it in the first place”.

Does pseudonymity necessarily produce a culture incompatible with civilized society? I would say no, and even if the answer was yes, it doesn’t matter. The internet is a big and diverse place and it doesn’t matter if there are people who have questionable motives exist as they aren’t forcing their ideas on others.

In Romeo and Juliet, Shakespeare (through Juliet) asks “What’s in a name?”, expressing the notion that the name is a meaningless and artificial convention which only serves to create an equally artifical and antagonistic gap between the protagonists. We can choose to subscribe to these existing and equally artificial distinctions and we should be able to choose not to.

This post is going to be nothing like any other post, because it’s going to be about the video frame at the 650th second of the movie Inception. 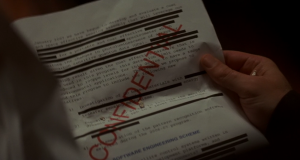 With a bit of Googling, it seems the first part of this document is “Development of Highly Sensitive Portable Hydrocarbon Sensors” by Dr. Michael Carpenter at the State University of New York.

January 2007 we have begun to develop and evaluate a cost

and space effective sensing assembly which will leverage our

for a portable and cost effective

monitors the changes in photoluminescence of arrays of

promising result given the cost effective hardware that is

being used in this program, this detection limit needs to

of environmental applications. Therefore, we propose to

expand this program to include the following new

1)Investigation of QD based materials with

2)Deposition of QD arrays to increase the sensing

4)Implementation of the pattern recognition software

And so the question is: Is there a specific reason that the secret document was of hydrocarbon detection? What does this have to do with the movie? Is there any significance of the redacted text?