The above testament to my artistic ability, or specifically my lack thereof, was made in my experiment with digital sculpting, technically, part II. Wikipedia says

Digital sculpting is the use of software that offers tools to push, pull, smooth, grab, pinch or otherwise manipulate a digital object as if it were made of a real-life substance such as clay. I saw this Lifehacker article on sculptris a few months ago and it sort of made an impression on me of how cool and awesome 3d was. Any real program is of course much different and better than this one because of the ability to actually grab, smooth and pinch the digital object. 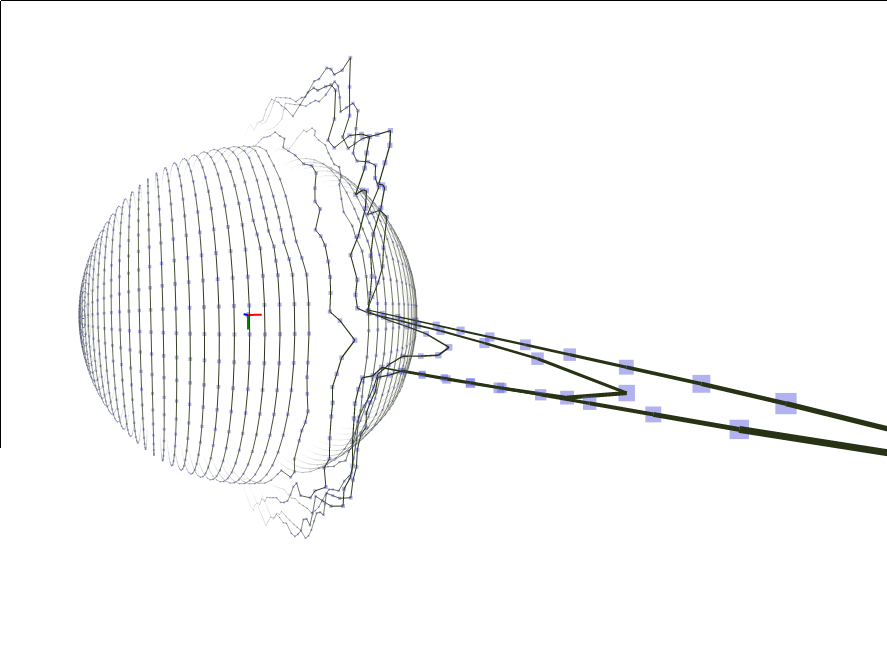 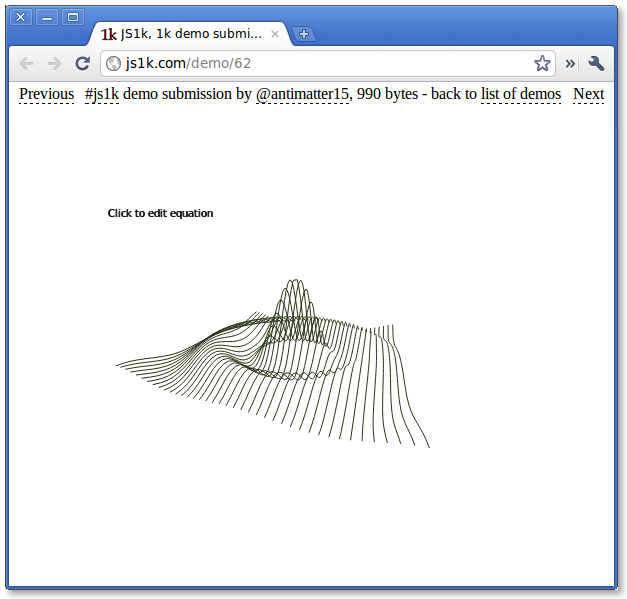 Interestingly, it does seem that a lot of the demos for the js1k competition are a whole lot more impressive than the 10k competition. Despite that js1k started with no prizes and 10k has a collective $10,000 worth of prizes. Though I do have several entries on both. Anyway, this is the continuation of my old 3d function plotter, but that one doesn’t work anymore because i’m evil and hotlinked the github repo and three.js updated in an api-breaking way.

I think function plotters are cool, and since 3d is all the hype nowadays, why not make a 3d function plotter? I like how WolframAlpha does it quite nicely, but it doesn’t allow panning/moving of the camera. Just as a disclaimer, I made this because it’s cool, not because I spent lots of time on it, on the contrary, it’s taken from the three.js 3D Canvas library floor demo with a 3 line change to make it pull a function from the URL.

On New Years Eve, I saw the awesome movie Avatar in IMAX 3D. I noticed how there were 2 projectors (which I knew before, but seeing it is different). I started thinking about how to make 3D work better, and one of the first ideas I had was to use a polarized wheel, sort of like the fast-moving color wheels that are used in single-DMD DLP technology, but with only two states of two different polarizations. Put that over a single projector, and use the normal relatively cheap polarized glasses! After looking into it, I learned that RealD uses basically the same technology (except they have a solid state switcher thingy rather than a color wheel, which I would assume is some superior technology). So I started thinking again, and came up with “LED Inverse Shutter Glasses”, which I’m nowhere near as certain about working.

LCD Shutter Glasses work by “blindfolding” one eye at a time, allowing a frame from the monitor/tv to be visible by that one eye, and alternating. This allows a different image to be sent to each eye, which our brains can assemble into a 3d image.

The shutter glasses are pretty expensive though (well, in my eyes (pun not intended) its insanely expensive), ranging from $100 to $200 or more.

How about inverse shutter glasses (which is a term I made up)? What if instead of darkening one eye, you add light through a side-mounted white LED? Radioshack sells White LEDs for $3 each (and probably you can get it cheaper elsewhere). OLEDs are apparently awesome because of their insanely low response times which are as low as 0.01ms compared to the 2ms LCDs (according to Wikipedia), and I would assume that LEDs are similar (Anything under 8ms, or 120fps should work).

I have no idea if it would work, and obviously it won’t work nearly as well as the LCD ones. Surely it would probably be pretty annoying to have light shine in your eyes, though I would hope its not that annoying. I’m not sure how it would work either, would it make your pupils shrink, and would your eye detect the un-brightened frame as dark? Or would the LED make everything white and everything hard to see, and be the equivalent of darkening everything away? Would this vary from person to person and setup-to-setup?