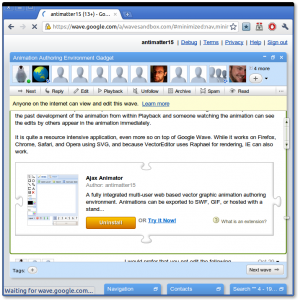 I was working on a new little Wave State API update. It supports lists in the form of subkeys, and something very much like hierarchy and events on specific sub-nodes. This way you don’t have everything update (someone’s edits on frame 36 doesn’t matter if you’re on frame 42).

Everything is namespaced under a singleton global, wave2. It includes functions like